One of the things that I like the most about financial markets is that they provide a great way to monitor arguments about the valuation of companies. If ABC's stock is trading at $100 or R100, and I think that's a bargain price for a world-beating operation like ABC, while someone else thinks that ABC is a dog with fleas and the right price is much lower (or even zero), then I can buy it and that other person can avoid it, or even sell it short. Then we can sit back and see what happens. There is usually a clear answer in time, but the valuation is constantly changing and sometimes those swings can be very significant.

One of our recommended stocks in New York, chip maker Nvidia, had a tremendous run over the past three years, growing in value by ten times, but has been walloped in the last six weeks.

What's going on? Nvidia reported quarterly (to October) sales of $3,2 billion and profits of $1.84 per share, which was below consensus expectations. The stock, which had already fallen sharply after reaching a high of about $290 on 1 October, fell further to close at $164.43 on Friday evening.

Remember that Nvidia makes specialised computer chips for high-end applications. The current mainstay of the business is gaming and professional visualisation, where its graphics processing units deliver market-leading performance. That part of the business did fine. It's blossoming data centre business is very exciting, because the new Tesla T4 chips are selling well. The laggard was sales to cryptocurrency miners. This makes sense and frankly, who cares? That craze has really come and gone.

Guidance for the year ahead was a little muted, and it will take time for expectations to be reset. It would appear that Nvidia was left with about a quarter's worth of excess inventory in its gaming business, which it now needs to clear ahead of the release of new mid-range Turing Gaming GPUs in 2019. Sales of that product should be good, especially in China.

The new bundled supercomputer Nvidia DGX2 unit (which is pictured below and costs about $350,000 each) is in great demand for artificial intelligence and deep learning applications. Units like these are plugged into big arrays and operate side-by-side. A key customer is Google, which has been ramping up orders in recent weeks.

All in all, this is a soft patch for a great company with a very significant technological advantage over its competitors. I bought some more Nvidia shares on Friday after the slump, and I advise you to do that too. 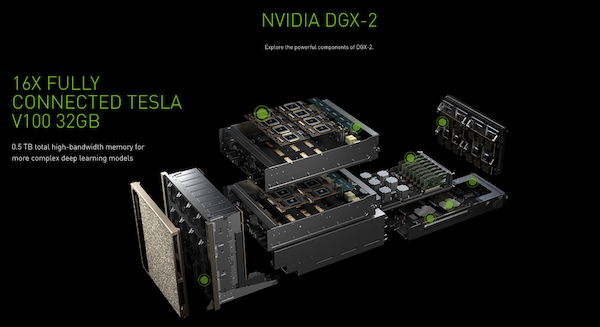