Wall Street started higher yesterday, then faded. The S&P 500 still closed up on the day, while the tech-heavy Nasdaq ended up unchanged. Major US indexes remain down substantially for the year, with the S&P 500 off 12% and the Nasdaq Composite lower by 20%, the latter erasing all of 2021's gains. Sorry about that. We expect an improvement soon.

On Tuesday JSE All-share rose 0.74%. After a horrible trading day on Tuesday the S&P 500 eked out a gain of 0.21% yesterday, and the Nasdaq was unchanged.

On Tuesday night Microsoft released its strongest set of numbers since the start of the pandemic. This was thanks to an increase in demand for server products and cloud-connected services. For the quarter from January to March, the company saw revenues rise 18% to $49.4 billion, and its net income climb 8% to $16.7 billion.

The Server and Office segments made up roughly 57% of revenue, 4% more than in the previous quarter. Cloud-hosting segment Azure is still the fastest-growing part of the business with a revenue increase of 46%, and is showing no signs of slowing down post-pandemic.

The Gaming division also saw record numbers of subscriptions due to the continued growth of Xbox Game Pass and console sales. If the $75 billion offer for Activision Blizzard acquisition goes through, the gaming division will become the third-largest revenue generator for Microsoft.

The company expects its sales for the current quarter to be between $52.4 billion and $53.2 billion. This is a strong outlook and the market seems to like it, since Microsoft shares closed up 5% in trading on Wednesday. The company is looking relatively cheap compared to its tech peers.

Microsoft should be an anchor position in your portfolio, and the current weakness in the share price is a great opportunity to accumulate more. 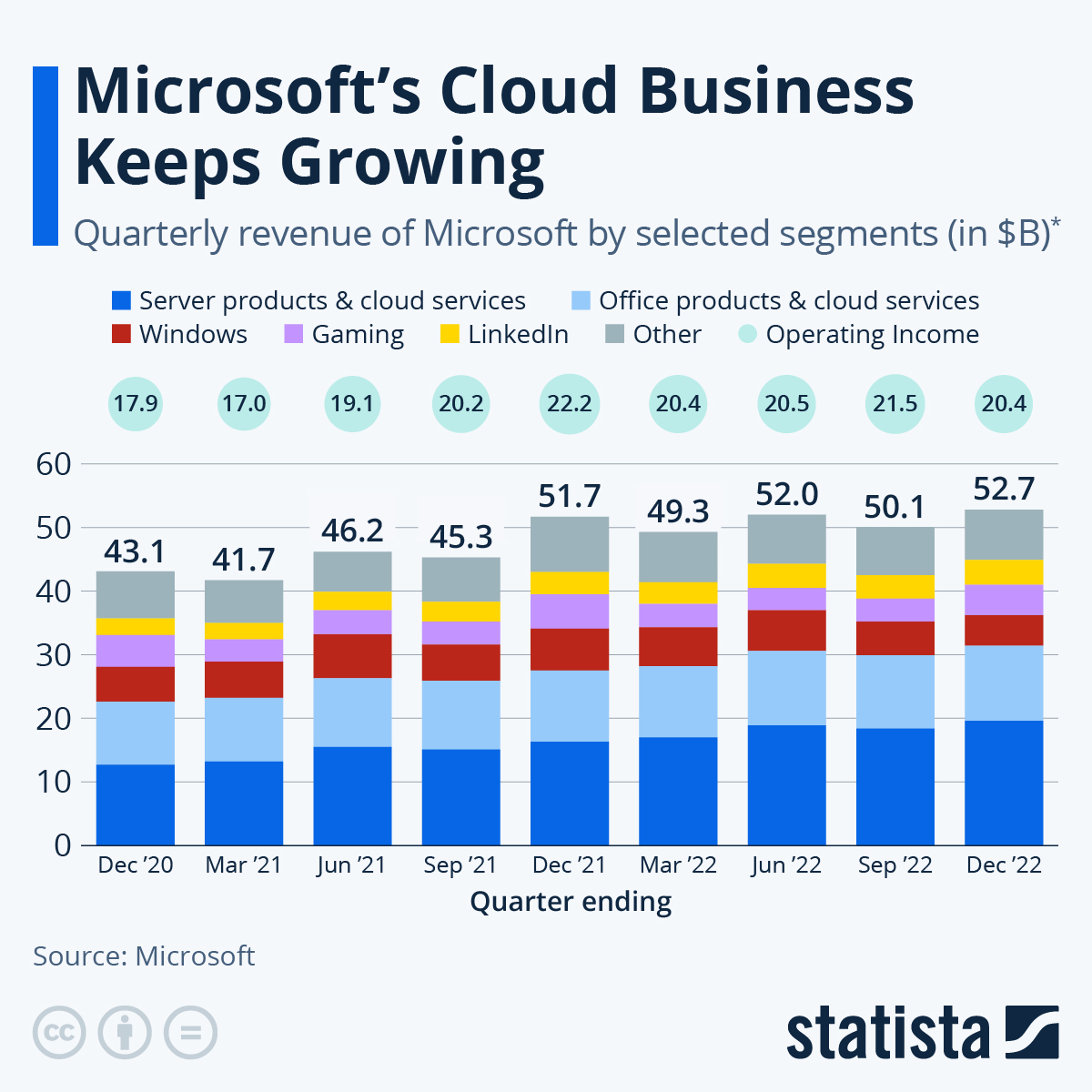 Investing is about picking the winners, but it's also about avoiding the losers. So long as you have more of the former and less of the latter, you can do well, perhaps even beat the index.

Here's a company that's been a big loser for the last five years: AB InBev. This review was written by my friend Tim Cohen at The Daily Maverick. It's spicy! I've pasted an excerpt below, but read the whole thing: We are actually just here for the beers. You can also sign up for Tim's After The Bell newsletter.

"AB InBev is not only the largest beer company in the world, but is twice as large as its nearest rival, Heineken. Yet from that date in October 2016 when the deal was consummated, AB InBev's share price is down by half and Heineken's is up by half. How on Earth did that happen? Size is supposed to be good. Beer is supposed to be good. Beer is good."

"It turns out that rather than being the final jewel in the crown, AB InBev's acquisition of SABMiller was almost totally pointless. The company's share price is now back where it was before the acquisition and its growth profile is no better than that of Heineken despite having a greater emerging-market aspect. That's what happens when you fly too close to the sun. Or oversample the product. Or both."

The timing of traffic lights is hugely important to efficient traffic flow. I'm not sure about the rest of the country, but in Joburg, our lights are not friends with the rain. Loadshedding doesn't help matters. It is interesting to see how traffic flows change when the lights go out. In some cases, the traffic congestion on one side of the intersection improves, but at the detriment of the other sides.

When it comes to setting the timing of lights, engineers use fancy maths to determine the best sequence for all traffic lights in an area, to ensure the smooth flow of cars. If the lights are in sync when you drive along a main road, you'll clear them all if you stick to the speed limit. That's fine but this approach hardcodes many assumptions.

California is currently trialling AI-powered traffic lights. The plan is to use live traffic flow data to have the most efficient light timings. In addition, these systems can track public transport vehicles and allow them to get through a route quicker. Imagine being on a bus that almost never stops at a red light. If public transport is quicker and less prone to delays, more people will use it, taking cars off the road.

Anything that lowers the time we spend in traffic is a huge benefit to humanity. This technology should be rolled out fast as fast as possible.

The most trivial things can build the strongest relationships. Here's why you should pick up an extra-curricular activity that you enjoy being part of - Sports are great because they're pointless.

Having a strong labour market is good for an economy because it means more people have money to spend. Given the size of the US, the health of their economy impacts the whole world - Fewest Americans collecting jobless aid since 1970.

All eyes will be on Apple, Amazon and Stryker earnings out later tonight.

US equity futures are higher in early trade. The Rand is trading at around R15.93 as the US Dollar strengthens against all major currencies. The greenback is currently at a five-year high.

If you live in South Africa today feels like a Monday but it's actually a Thursday. This is good.